Riding a bike was once impossible for Coatesville resident Dale Henderson. But now the 15-year-old, who has severe autism, can add a 30km mountain bike event to his mission possible list.

His latest achievement was tackling the Dual Traverse of Motutapu and Rangitoto islands among a field of more than 200 participants. Dale has grown in confidence at playing sports through dedication and persistence.

Personal trainer Maxine Barrett of Muriwai says it has been a privilege to see what Dale has accomplished. She has been working one-on-one with him since 2004. Their early sessions covered the basics of running, skipping and ball handling skills. “In running, Dale had to learn the feel of the running action, what to do with his arms, how to understand the difference between a steady pace and a sprint. “He had to learn everything about body co-ordination,” says Maxine. Dale’s determination has helped him conquer the swimming pool. At first he could only manage 20 or 30 metres in the water, Maxine says. But now he can complete a 2km training session a public pool complex. In skiing, he has learnt all the skills needed to get up a slope and confidently back down. “Over the years I have been amazed at what he has done. “For someone in his situation, it is nothing short of remarkable.” Maxine says Dale has shown incredible determination to master sports and many other life skills. “This has all come about because of constant repetition on his part and early intervention of specific learning programmes and natural health protocols. “He also graduated from the Bright Sparks programme for children on the autistic spectrum,” Maxine says.

Dale’s parents Mary and Tony encourage their four children to enjoy family activities together. “We’re into creating a community life so we’re not isolated. “It’s really Kiwi stuff we’re doing – everybody has the right to sport and recreation.” Basketball is a huge sport for the family because Tony is a former manager of the New Zealand Tall Blacks and the family are keen supporters of the Breakers. At first Dale couldn’t handle the noise and movement of watching basketball in a crowd, but now they can all watch a gam together. Mary is also a badminton coach for the Hibiscus Coast Special Olympics team, which Dale participates in. “One of our goals is to always take part in whatever the community is doing.” Seeing the transformation of Dale makes it all worthwhile, she says. At first he was physically unable to bike, run or kick a ball, but now he is taking part in sports.

Dale was one of the first children to go to Bright Sparks, which is a sports programme run by Autism House in North Shor with Felicity Roberts as its chief executive officer. The house is the result of a vision by parents and staff to offer hands-on Kiwi-based skill-building opportunities for those autism spectrum disorder. Mary, who was the past chairwoman for Auckland Branch of Autism NZ for six years, says having Maxine work with Dale been life-changing. With her background in sports and her experience working with Bright Sparks, Maxine saw the potential to extend his sporting level beyond what she ever thought possible for her son.

“She’s always so excited and enthusiastic. It’s very, very cool for him and us,” says Mary. 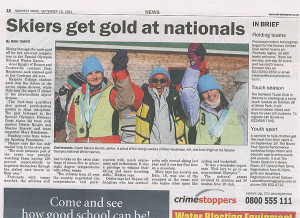